I’m a sucker for a good love story. And I think most of us are. The difference may be that some of us like our love stories unvarnished and unadulterated, and others like it wrapped in painstaking detail about a different time, a different place, or with interesting background circumstances and a swirl of other goings-on.

I like love stories with unconventional beginnings, beginnings that are imperfect. I think that’s usually how real life love stories begin, especially today, and especially with modern, liberated women like ourselves. Sometimes our love stories begin with us sleeping with a man sooner than is advisable; or we fall for someone who is inaccessible because he’s married, or dating someone else, or lives on another continent, or is emotionally closed, or unwilling to change.  So in my stories, there is almost always a love story at the core, but what surrounds it is different.

Fame is one that I’m finding really intriguing right now. Over the summer, my friends and I have had frequent conversations about an interesting social phenomenon embodied in reality shows like ‘Basketball Wives’ or ‘Mob Wives’ and I think there was a ‘Football Wives’ and ‘Hip-Hop Wives’ show at one point. So I began to wonder what it must be like to be defined almost solely by who you’re married to; and not even who specifically, but in terms of what he does for a living, and whether its something high-profile.

From everything I’ve seen of these shows, I was horrified by how constrained and how small the worlds of these women are. They are locked in these prisons of their husbands public identity and as a result make a tempest in the tiny teapots that are their lives. And that got me wondering: what would it be like for a woman who had her own strong and defined identity to enter that world? What challenges would she face adjusting to becoming a just the “wife” of a famous person, and less so, her own person? And more than that, how might it be for a man who has seen other wives fit into that small world come to realize that his wife will not, and cannot do so? How might he react?

I imagined he would be threatened by it, but aroused by it and maybe even proud of her for it. I imagined that he might be conflicted because if her independence was what made her attractive to him, he also wouldn’t want to squelch that spirit, even if it befuddled him and frustrated him and made him crazy with jealousy.

And from that thought process, my novel, ‘Commitment’ was born.

I wanted to explore how a couple like the kind I’ve just described would navigate this new territory for them both, and I wanted to watch their relationship organically unfold as I wrote. So for that reason, I wrote ‘Commitment’ without an outline and let the characters themselves determine where they would go. So what they say, and what they do in the book was not predetermined by me, it was a function of what that ‘person’ would do in that given situation. (As any novelist will tell you, what most people would call their ‘characters’ become very real . . . they are people, just as certainly as you or I.)

So anyway, that’s a little of my thought process that I thought I would share.

I’ll close with my opening theme: imperfect beginnings. As an overlay to the theme of fame and relationships, I also worked in the notion that a great love story can begin imperfectly. The main characters in ‘Commitment’ sleep together the very night they meet (and there are other circumstances that make that a particularly bad idea, but I won’t ruin it for you). I think most of us would agree that that generally doesn’t lay the foundation for a durable and profound connection. But I believe that despite that beginning, such a connection could develop, and so I wanted to explore how that might happen. 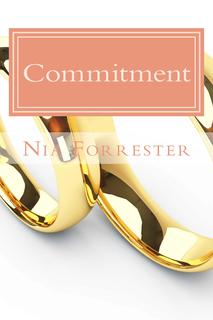 You need to be a member of African American Author's Expo and Multi-Cultural Book Fair to add comments!